The majority of archers use recurve bows to shoot with, but compound bows and longbows are also popular. All of these bow types are allowed in competitions but archers compete in different classes according to their bow types. 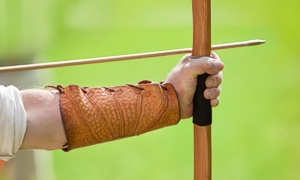 The longbow is the simplest form of bow used in competition and resembles the traditional bow used by mediaeval archers.

Archers shoot wooden arrows and use the minimum of shooting aids.

Recurve bows are the most popular and are to be seen at all major target archery competitions including the Olympics.

They are characterised by the fact that the tips of the bow limbs curve away from the archer, giving more power than the traditional longbow. Some shooting aids are allowed, such as sights and stabilisers, although some archers shoot without them in a discipline called 'bare bow'. Arrows are generally made of aluminium and/or carbon fibre. 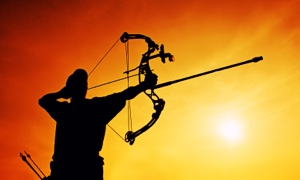 Compound bows are the hi-tech bows of archery. They are much shorter than recurves and have a system of pulleys or cams around which the string runs. This allows for much more power and speed of arrow flight, but a lower draw weight on the archer's fingers.

A number of shooting aids which are not allowed on recurves, such as magnifying sight rings, can be used with compounds. Arrows are usually made of aluminium and carbon fibre, although aluminium arrows are shot by some, especially indoors.